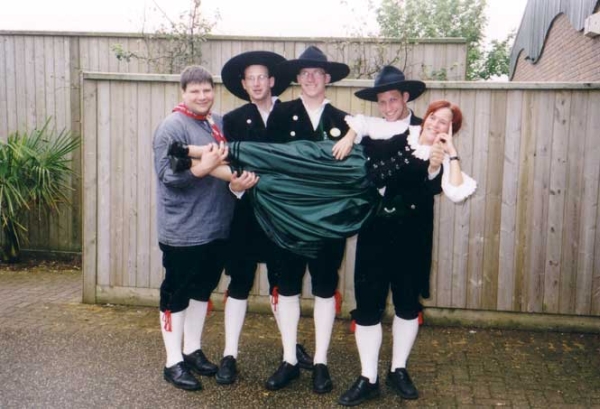 this is a short translation of our story, the weekend in July. I hope, my english is so well, that you can understand everything. Otherwise translate the german text. (Bernd, then it`s your part!) You will see the photos in the german summary.

It was the 05.07. in 2002 and we "Pfalzdorfer" arrived at Mönchengladbach. We were afraid, not to find the other, but the airport had only 1 check-in. We danced the first time and the stewardesses looked amused. The flight in the small machine was o.k., someone tested the buttons at his seat and Karola was not happy about it. We had breakfast and some drinks. It comes the time for somebody, that the small bag was his best friend. The vibration was not very good for him, but nothing happened…

Arrived at the airport, we changes the first "Hello" and "How are you?" with Peter & Co. We ate something and drived to Cambrigde and to "Henry`s Café Bar". We began to dance with the Freidige, the Oberschlesischen Kegel, the Neuen Polka, the Lanzer, the Kreuz König, the Gumbiner, the Toppede Høne and with the Mambo Nr. 5 oh, sorry, the Sauerländer Quadrille Nr. 5.

The weather looked like we german think about weather in England. It would rain, it rained a bit, but not many. It looked like: I want to rain, but I cannot!! The second dance-place was in front of a church, the third on a street of english banks. Where you looked, there were banks, HSBC, Barclays, it's like in Germany.

We saw many Japanese or Korean-tourist. The football-world-championship ended last week, and then they directly came to Europe. They made many many photos of us, I think, these photos were pinned in every 5th children-room in Asia. We got hungry and went to "The Archor". We ate Plumans Lunch. After lunch we drunk und sang some songs. After this, we went to an university. It was a big building with big trees and a big park Very interesting. In darkness, it has got something of magic …

We got wet a bit. We punt and Kücky was the only one of us, who did the punt. He stood at the end of the boot and with his strong arms he steered it on the water. You can see, that Punting was very popular in Cambrigde, because - when they ride on their bikes - they don`t know where to park. It is a big problem. They took their bike to everywhere to park.

Arriving at the families, we took off our clothes and arranged for the evening. We ate with the whole group and danced many group-dances. It was very funny to dance with everybody. But the next day came soon and we had our meeting at the following Saturday morning on a park-deck. Our women were bored, until they saw the boys of Worms. They had no T-Shirts. Their body was naked. The eyes of our women got bigger and bigger, but these were boys, who hadn't any hairs on there breast of chicken, they were between 16 - 19.

The other groups were very coloured. Sometimes, they had more musicans than dancers. Our parade was about 1 or 2 km. Arrived at the end on a small place, every group danced there show. We danced two times in 6 minutes. After a short drink, we went to the park for the next dance-event at this afternoon. And we picknicked. We looked for the biggest tree and set down with all people. It was fine weather and we could relax. Hmmmmm, it was fine…..

The last call of the city, we danced the last time at a round place in the middle of the city. The stores hadn`t closed and many people were there. After this we drived home, ate again something, took a shower and got ready for "THE BIG SQUARE-DANCE-EVENING" in the Arena. A 6-Man-Band was there and played fast and loud music. The caller told everybody to dance. At this evening we showed everybody our german dances. I thought, the arena exploded by the applause for us. We got wet, because it was hot in the arena.

The next day, we danced near the lions. Near, not together. In the Woodburn Safari Park. Many children were there with their parents and danced in small circles next to us. Many photos of us were taken. The afternoon came slowly and we took the last time a big picknick with all together. We made a photo with all, to remenber this great weekend. It was very interesting, we got a chance to speak our school-english - and - everybody understand us!!!!! We saw the first time pounds, the english weather, the original english tea (hmmmmm!!), cars, who drived on the left side, an english university and got english ( and one german, hey Bernd) friends.

We remember often this weekend, say "Thank you" to the group of Bielefeld and Gütersloh, that they take us to England, and many thanks to our new friends of St. Albans. Every time I sing to myself "My bonnie.. " I must remember.

Thank you all for these SUPER DAYS in England! 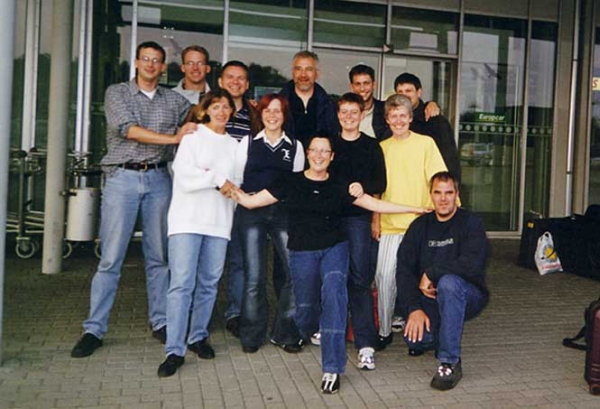